So, I honestly can’t believe I haven’t ever done a post like this before. It’s really quite mind-blowing. Below is a list of my top five favorite books. A few of them I would encourage anyone and everyone to read, even if you don’t read the genre. In my opinion, they are some of the best-written works. So, let’s crack the covers and check them out. 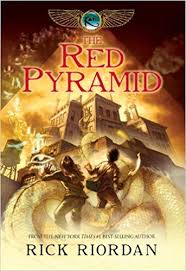 Likely the lesser-known mythology series by Rick Riordan in his ever-growing stack of mythical fantasy. Just like the Percy Jackson novels, this book follows teenagers who find themselves interacting with mythical gods – this time of ancient Egypt. (Yes, I’m an Egypt buff and Rick Riordan is one of the reasons – aside from the amazing lore, art, and architecture.)

The books follow brother and sister, Carter and Sadie Kane, as they delve into the world of ancient Egyptian magic. They’ve lived their boring life in London until discovering they were part of a society of magicians. The stores are a whirlwind of amazingly written gods and conflicts that have the pair running everywhere in an attempt to prevent impending chaos. This is a great read for any who loves YA or Egyptian mythology.

I’m a fantasy writer guys…give me a break. Yes, I know what you’re thinking, “Eragon over classics like LotR and GoT?” Well, I haven’t gotten around to reading GoT yet. (Still kind of pissed at the way the series ended) and I tried reading LotR after seeing the movies first. I probably did myself that injustice and it just hurt my ability to read the books. *Mental note to me: Read the books before you see the movie. (Unless it’s as bad as Percy Jackson…then just don’t see the movie. Still looking for a way to wash that experience out of my brain.) I actually chose not to see Eragon, the movie, because I heard it was terrible.

Eragon, the book, written by Christopher Paolini, follows a lone farmer boy who has fate thrown into his lap. The world is ruled by a lone tyrant who has lived for many years and made the people cower at his feet. He and his mighty dragon silence all his opponents. None are strong enough to stand up to him…until Eragon.

This book is a fantastic fantasy. It has everything you would want from this genre. Swords, magic, dragons, elves, dwarves, fantastical creatures – and one seriously grumpy three-legged dragon. Once you read Eragon (book 1 in the Inheritance Cycle) it only gets better. But I will warn you, the ending of the saga left me…you know what, go read it yourself and let me know what you think.

…or as I like to call it, very close to modern-day. You have probably heard people say how present-day feels like we are moving closer and closer to Orwell’s dystopian novel. If you have never read 1984, I encourage you to read it and see just how close we actually are.

There are Thought Police, Big Brother, forbidden sex, and three superstates that rule the entire globe. The story follows the main character, Winston Smith, as he tried to unravel what happened to the world that has landed them where they are. In the meantime, he commits to numerous forbidden sex acts with a woman named Julia who feels sex is her way of rebelling against a government who feels sex should only be used to procreate how they see fit.

This dystopian tale was written to show the world what could happen to the government. Although it was written in the 40’s it is a fantastic cautionary tale that rings very close to home. 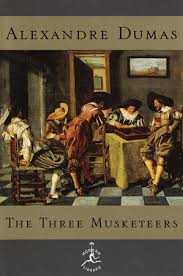 If you follow me, you had to see this one coming. My son’s name is D’Artagnan, for goodness sake. I was going to name him after a character from #1 on this list as well, but I wasn’t as fond of that name as I am of this one.

This book, written by Alexandre Dumas, has been made into multiple movies and I’m sure most people have enjoyed at least one of them. I must admit, the most recent one wasn’t my favorite (although I am quite fond of Mila Jovovich) However, of the ones I’ve seen, and I haven’t seen them all, the 1935 version is my favorite. From what I could tell it followed the book the closest. However, don’t discount Disney’s version in 1993. It too was very good, and Tim Curry is amazing in everything.

The Three Musketeers follows young D’Artagnana, a Gascon who wishes to follow in his father’s footsteps and become a Musketeer for the French King. However, the Cardinal and his guards are always there to start trouble as he and his three companions, Aramis, Athos, and Porthos, become embroiled in multiple political and romantic subplots. I would also recommend this book to all readers. The number of amusing twits will leave you guessing and ultimately shocked by the outcome. It is a great read, and it has numerous sequels (Twenty Years After, The Vicomte of Bragelonne, Ten Years Later, Louise da la Valliere & The Man in the Iron Mask) that are still on my list to be read.

#1. The Count of Monte Cristo

In my opinion, this is one of the greatest books ever written. (Shout out to classmate Paul Rice, who recommended it to me when I was in high school.) Alexander Dumas was a genius. The Count of Monte Cristo follows the main character, Edmond Dantes, a young man who is about to have great fortune fall into his hands: a soon to be captain of his own ship, about to be married to the love of his life. However, there are those who are jealous of his fortune and begin plotting against him. Dantes finds himself imprisoned for treason. But he doesn’t stay behind the walls of the Château d’If forever…

This book is a complex story with incredible characters and more plot twists than a Taco Bell cinnamon twist…ohh, could totally go for a cinnamon bun right now…Anyway, if you can, I encourage you to get the unabridged version. Yes, it is full of French terms that you may not understand and includes some rather deep intricacies on the aspects of French life, but it is truly a wonderful book. I can almost guarantee any reader will put it at the top of their favorites list…if not, I’ll give you every penny you lost reading this free blog. Haha.